You are here: Home / Career / Retail Management Positions – How To Get Them

Most Career Advice out there is Horrible

Firstly, I’ve done alot of research and read ALOT of Career Advice and I’ve got to say – most of it is just garbage that makes me want to vomit. A huge proportion of it seems to be written by people who haven’t looked for a job in 20 years, who possibly haven’t ever even used the internet in their job hunt before, while others just regurgitate different iterations of conventional wisdom with titles such as “Top 7 tips for finding a job” or useless advice like “How to make your Resume stand out using bold font!”

Even worse are the Linkbait headlines like “The 5 things that are destroying your career job hunt, number 2 changed my life!!” which contain one-liner tips with no explanation on why or how it is even important. Which is because the so-called “authors” have no idea. It makes me angry, because this garbage is designed to drive page views, not to help people like you.

Advice out there isn’t for Retail

Another problem is that there isn’t anything out there specific for Retail, if you are lucky enough to find someone that is actually competent and seems to know what they are talking about when it comes to Career, unfortunately it is pretty much useless, because the advice is geared towards Investment Bankers or Senior Finance Project Managers etc, with advice on how to network with CEOs or your Harvard alumni prior to the interview and how to demonstrate a Financial Forecast Model with Microsoft Excel during your interview. Ughhh.

Not everyone has the opportunity to choose not to work straight out of school and go to Top Tier Universities and get 6 year degrees. I see so many talented people in retail stores and I know they have what it takes to progress their career, get the money they deserve, to be able to live the life they want. These people have potential that isn’t being used or nurtured by their company/managers to develop, and their talent is just going to waste. Unfortunately though, unless they take action and do something about it, or find someone to guide or teach them, they are likely to just tread water and be “stuck” where they are now for the rest of their lives, no matter how hard they work.

Advice out there isn’t for the Australian environment

The rest of the career advice I see isn’t for the Australian market and makes numerous and repeated references to the GFC and the post Global Financial Crisis economy and how it is affecting the ability to get or land jobs.

In actuality Australia was fortunate enough to be one of the least affected countries in the world and boasts one of the world’s best economies, with strong growth, especially across the Retail Sector. Now, there are certainly challenges faced by the Retail Industry – particularly across Fashion, Electronics and General Merchandise (Think Myer or David Jones) – in terms of rising online sales, and lower household discretionary spending, however this impacts more on Head Office workers and less on front-line Retail Managers and workers.

The reality is that Retail Managers are one of the most sought after commodities on the job market, as the Big Box Retail companies like Woolworths, Coles, Bunning and Big W are continually building new stores and need people to manage them. Many Store Managers also eventually move to Head Office positions or leave their company to do lateral moves into other industries, using the skills and experience they have gained, or start their own business. Which means even more opportunities for people that want to progress into these highly paid (You do know that Store Managers at places like Coles, Woolworths & Kmart are on $100k+ 15-20% bonuses right?) positions.

So there is a large appetite from the Retail industry to find or develop people for these roles, the challenge is how do you make sure you are on of those people?

Getting a Retail Management Position – What you REALLY need to do:

What most people do

So faced with all this what do most people do? Well, not much. They agonise over a Resume that is fundamentally terrible, and spend disproportionate amounts of time changing the font size and colours. When they do somehow manage to get an interview they just show up, with little preparation.

A friend of mine got an interview for a Retail Management position recently, I had let him know about the role (before it was even formally advertised – that’s how the secret job market works) and he let me know he had been invited for an interview. This guy is relatively competent and had a good resume which I had helped him improve before he sent it, but he had no runs on the board with this particular Hiring Manager. I said to him something along the lines of “Ok good work, I’m happy to take you through questions they are likely to ask, then do a mock interview, then critique your answers to show you where you can improve.” – guess what his response was? “Thanks, but it’s all good man, I like to go into an interview fresh and just wing it.”

Just wing it?? FFS this isn’t a freaking Year 9 oral presentation. Needless to say my friend flopped in the interview and didn’t get the role.

Funnily enough I knew another candidate who went for the same role. He took 2 other Managers from different areas through his answers and what he wanted to talk about, getting their feedback and input. He also took the hiring manager for coffee for an “informational interview” where he asked more about the specific requirements for the role – but more importantly, he built rapport – and learned exactly what the hiring manager was looking for in terms of attitude and cultural fit in his team. By the time he got to the interview it was almost a mere formality that he got the role.

This is a classic example of “How The Game is Played”. My other friend had no idea what he was up against and just showed up to an interview. This is the difference between being a top candidate, or just a “good worker” who is frustrated they never get promoted. 80% of the work is done before you ever step into the Interview room.

Fortunately for you, the vast majority of people just “Show up” or “Wing it” in an interview. Especially for lower level Retail Manager jobs. If you’re smart enough to be reading this post, and have made it all the way down to here, then I have made some assumptions about you.

If most or all of the above sounds like you, then you probably have what it takes to go far in your Retail career. But the problem is – less than half of you will actually take any action or do anything to push yourself your career forward.

Some will think, “This is so true, but meh, sounds too hard”. But what they’re really saying is “I’m just going to stack vegetables for the next 20 years”. Some of you will get super motivated for an hour, start updating your resume then get distracted by Facebook and never get back to it.

But like the first ray of sunshine bursting out through the dark clouds on a rainy day, some of you will make a decision to take action, to do something about your situation. To get the edge on your competition and put yourself on the path to more money, better work and more respect in your workplace.

To these people, welcome. Sign up to my Private List for exclusive info about progressing your Retail Career that you won’t get anywhere else on the site, and to be the first to know when I put up a new post. – aj

What did you think of this Post? Leave a comment or email me (I read every one) if this resonates with you or if you have any questions or post suggestions.  -aj 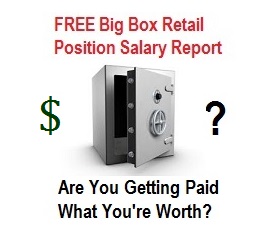